Picturing the flight of the Woman

13 And when the dragon saw that he was thrown down to the earth, he persecuted the woman who gave birth to the male child. 14 But the two wings of the great eagle were given to the woman, so that she could fly into the wilderness to her place, where she *was nourished for a time and times and half a time, from the [fn]presence of the serpent. 15 And the serpent [fn]poured water like a river out of his mouth after the woman, so that he might cause her to be swept away with the flood. 16 [fn]But the earth helped the woman, and the earth opened its mouth and drank up the river which the dragon [fn]poured out of his mouth. 17 So the dragon was enraged with the woman, and went off to make war with the rest of her [fn]children, who keep the commandments of God and hold to the testimony of Jesus.

(12:6) Literally: they would nourish her for

Intro to a tiny gallery

The woman is given a gift of wings – of flight! Her crown of twelve stars remains in place as she flees the dragon and the flood he sends after her. Both images portray the dragon’s strange head, a single dominating head and six servile ones. Monstrous indeed but the woman is safe!

12 A great sign appeared in heaven: a woman clothed with the sun, and the moon under her feet, and on her head a crown of twelve stars; 2 and she was with child; and she *cried out, being in labor and in pain to give birth.

3 Then another sign appeared in heaven: and behold, a great red dragon having seven heads and ten horns, and on his heads were seven diadems. 4 And his tail *swept away a third of the stars of heaven and threw them to the earth. And the  dragon stood before the woman who was about to give birth, so that when she gave birth he might devour her child.

5 And she gave birth to a son, a male child, who is to [a]rule all the [b]nations with a rod of iron; and her child was caught up to God and to His throne. 6 Then the woman fled into the wilderness where she *had a place prepared by God, so that there [c]she would be nourished for one thousand two hundred and sixty days.

Intro to a tiny gallery

The importance of this passage convinced me not to introduce it with a mere image. Instead I’ve appended a tiny gallery.

No painting or engraving can capture the glories or terrors of the Apocalypse. Every attempt will fail, for God’s Word alone is Truth and Eternal, and absolutely Real. Art is a gift to us when it reflects and honors His Word, for then it can delight us and remind us of the One Who is good, holy, and true – the Triune God. 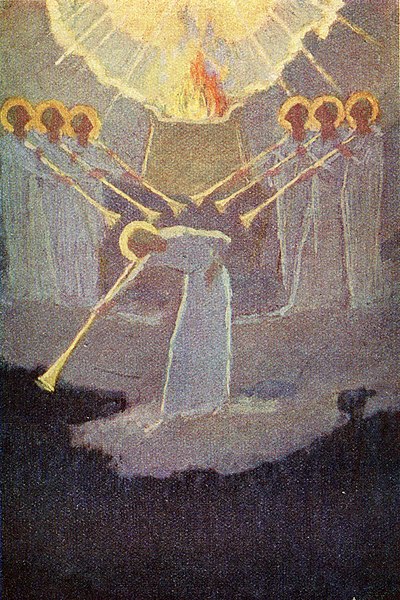 15 Then the seventh angel sounded; and there were loud voices in heaven, saying,

“The kingdom of the world has become the kingdom of our Lord and of His [a]Christ; and He will reign forever and ever.” 16 And the twenty-four elders, who sit on their thrones before God, fell on their faces and worshiped God, 17 saying,

“We give You thanks, O Lord God, the Almighty, who are and who were, because You have taken Your great power and have begun to reign. 18 And the nations were enraged, and  Your wrath came, and the time came for the dead to be judged, and  the time to [b]reward Your bond-servants the prophets and the [c]saints and those who fear Your name, the small and the great, and to destroy those who destroy the earth.”

19 And the [d]temple of God which is in heaven was opened; and the ark of His covenant appeared in His [e]temple, and there were flashes of lightning and sounds and peals of thunder and an earthquake and a great [f]hailstorm.

The book of revelation in Art

Below is an illustration of the Seventh Angel from The Saint-Sever Beatus, also known as The Apocalypse of Saint-Sever, (Paris, Bibliothèque Nationale, MS lat. 8878). It is an 11th Century French Romanesque illuminated Apocalypse made at Saint-Sever Abbey. Among other things it contains the Commentary on the Apocalypse of Beatus of Liébana.

Here is a bit about Beatus of Liébana and his original commentary of which The Saint-Sever Beatus was a copy:

Towards the end of the eighth century Beatus, a monk in the monastery of San Martin de Turieno, near present day Santander, compiled a Commentary on the Book of Revelation, or Apocalypse, from the writings dedicated to the topic by such patristic authors as Jerome, Augustine, Ambrose and Irenaeus. Recognition of Beatus of Liébana has survived to our time thanks to his decision to illustrate the sixty-eight sections into which he divided the text of the Book of Revelation . . . Lacking any copy from before the tenth century, we cannot be sure of the appearance of Beatus’s original illustrations.
John Williams, The Public Domain Review

7 When they have finished their testimony, the beast that comes up out of the abyss will make war with them, and overcome them and kill them. 8 And their dead bodies will lie in the street of the great city which mystically is called Sodom and Egypt, where also their Lord was crucified. 9 Those from the peoples and tribes and tongues and nations will look at their dead bodies for three and a half days, and will not permit their dead bodies to be laid in a tomb. 10 And those who dwell on the earth will rejoice over them and celebrate; and they will send gifts to one another, because these two prophets tormented those who dwell on the earth.

11 But after the three and a half days, the breath of life from God came into them, and they stood on their feet; and great fear fell upon those who were watching them. 12 And they heard a loud voice from heaven saying to them, “Come up here.” Then they went up into heaven in the cloud, and their enemies watched them. 13 And in that hour there was a great earthquake, and a tenth of the city fell; seven thousand people were killed in the earthquake, and the rest were terrified and gave glory to the God of heaven.

14 The second woe is past; behold, the third woe is coming quickly. 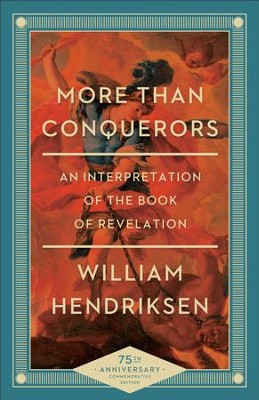 Some Christians, including Dr. Hendriksen, believe that the Two Witnesses portray the Church in this present Gospel Age between the First and Second Coming of the Lord: its witness (ministerial and missionary), proclamation and judgements, and suffering. Others believe that they are individuals who will appear at the End of the Age. May the Lord give us light and peace about these important truths!

The book of revelation in Art

Below are illustrations from a 13th century manuscript housed in Oxford’s Bodleian Library, MS Douce 180 (The Douce Apocalypse). According to Wikimedia Commons, “The manuscript was never finished, and the illustrations are in various states of completion. Some survive as exceedingly sensitive line drawings; others have their gold leaf added, while others are partly coloured.”

3 Behold what manner of love the Father has bestowed on us, that we should be called children of God! Therefore the world does not know us, because it did not know Him. 2 Beloved, now we are children of God; and it has not yet been revealed what we shall be, but we know that when He is revealed, we shall be like Him, for we shall see Him as He is. 3 And everyone who has this hope in Him purifies himself, just as He is pure.

Father, there is so much more here for us than we can get from a quick reading. Help us to take our time with your Word and grow in our love for the Lord Jesus!