9 “Only give heed to yourself and keep your soul diligently, so that you do not forget the things which your eyes have seen and they do not depart from your heart all the days of your life; but make them known to your sons and your grandsons. 10 Remember the day you stood before the Lord your God at Horeb, when the Lord said to me, ‘Assemble the people to Me, that I may let them hear My words so they may learn to fear Me all the days they live on the earth, and that they may teach their children.’ 11 You came near and stood at the foot of the mountain, and the mountain burned with fire to the very heart of the heavens: darkness, cloud and thick gloom. 12 Then the Lord spoke to you from the midst of the fire; you heard the sound of words, but you saw no form—only a voice.

Are images that attempt to portray Jesus idolatrous? I have been thinking about this for a long time. Today, in Evangelical and Fundamental churches, much of the teaching on idolatry centers on Paul’s statement that covetousness is idolatry (Colossians 3:5), or condemns the exaltation of anything in our lives that takes the place of God. But what about the literal making and using of images of Jesus?

isn’t an illustration in a Children’s Bible,

a doll in a manger,

statue in a cemetery,

or appealing sketch of a laughing man.

He isn’t even the central figure

in an amazing mural

in our nation’s Capitol.

All of these things are lies that diminish

our understanding of the Lord and of walking by faith.

Bible-believing Christians are using so-called pictures of Jesus on blogs, in videos, movies, emails, and even on T-shirts. Please study this issue prayerfully. It isn’t a trivial thing. The question is: If we use them, can we call ourselves Bible-believers? May the Lord never say this about us:

17 Ephraim is joined to idols;
Let him alone.

What does God’s Word teach about this? Here are some important passages:

We are not to make images and likenesses. Exodus 20:4-6

Whoever keeps the whole law, yet offends in one point, is guilty of breaking the entire law. James 2:9-11

True worshipers worship the Father in spirit and in truth. John 4:22-24

A side note – An accusation, and a little about old arguments

Awhile back, in preparing this I came across a blog that leveled a very old charge against Christians who object to images of Jesus. This is the charge: That because of the Incarnation, if we say that He should not be depicted, we are denying His humanity. But I confess that Jesus Christ has come in the flesh – that He is God in the flesh – but also affirm that because images of God are forbidden, and since Jesus Christ is God, that therefore images of Him should not be made.

Another old argument strikes a blow at making these images. It argues that because God the Son is both God and Man it is impossible to portray Him, for His Deity can never be portrayed.

24 For in hope we have been saved, but hope that is seen is not hope; for who hopes for what he already sees?

1)     We can’t know how Jesus looked during His earthly ministry – no artist is capable of doing this. The prophet Isaiah, and John in Revelation, described some of Jesus’ characteristics. Here is Isaiah’s description, which reveals a negative, that the Lord wasn’t handsome as so many images picture Him:

1 Who has believed our message?
And to whom has the arm of the Lord been revealed?
2 For He grew up before Him like a tender shoot,
And like a root out of parched ground;
He has no stately form or majesty
That we should look upon Him,
Nor appearance that we should be attracted to Him.
3 He was despised and forsaken of men,
A man of sorrows and acquainted with grief;
And like one from whom men hide their face
He was despised, and we did not esteem Him.

In Revelation, John described what He saw, the Lord Jesus Christ as He is now, having risen from the dead and ascended to the Father; not as He looked when He fed the 5,000, or walked on the waves of the sea. (Seeing the Lord as He is now would make us fall at His feet as if dead, just as John did.)

13 and in the middle of the lampstands I saw one like a son of man, clothed in a robe reaching to the feet, and girded across His chest with a golden sash. 14 His head and His hair were white like white wool, like snow; and His eyes were like a flame of fire. 15 His feet were like burnished bronze, when it has been made to glow in a furnace, and His voice was like the sound of many waters.

2)     Particular depictions of Jesus may appeal to us but repel others.

Having concern for the lost

You probably don’t worship images, kiss them, or bow before them in prayer – but some people do and think that this is right worship. Do you want to stand with them in darkness, or be a light to them? Do you want to preach Christ crucified to them, or offer them a lie?

8 and though you have not seen Him, you love Him, and though you do not see Him now, but believe in Him, you greatly rejoice with joy inexpressible and full of glory, 9 obtaining as the outcome of your faith the salvation of your souls.

I’ve tried not to be discouraged by the seeming blindness of Christians to the obligations of the second commandment, but it is difficult when even mature Christians dismiss them. After studying and praying, I can see that there is no ultimate argument that will convince others, who in many ways are better Christians than I – only the Lord can convince and convict. May He pity us! May He help us to get ready for His return! And may we find comfort in the knowledge that someday He Himself will destroy these things.

20 And we know that the Son of God is come, and hath given us an understanding, that we may know him that is true, and we are in him that is true, even in his Son Jesus Christ. This is the true God, and eternal life. 21 Little children, keep yourselves from idols. Amen.

“It is not sufficient to cast images out of the heart by the preaching of the word unless they are removed also from sacred places (where they cannot remain without danger of idolatry). . .”

As a Catholic child I loved the large ornate crèche that our parish church always placed in front of Mary’s altar at the beginning of Advent. Around and above it, fir trees stood. We had our own small nativity set at home – its figures were small enough to place by hand in a little stable.

If the Lord wanted us to worship using things like this, why did Jesus teach us,

A Nativity Scene isn’t a teaching tool or a seasonal decoration but a focus for our idolatry.

3 So all the people broke off the golden earrings which were in their ears, and brought them to Aaron. 4 And he received the gold from their hand, and he fashioned it with an engraving tool, and made a molded calf.

Then they said, “This is your god, O Israel, that brought you out of the land of Egypt!”

“. . . We must hold it as a first principle, that as often as any form is assigned to God, his glory is corrupted by an impious lie.” (Institutes, 1.11)

The Second Commandment, Westminster, and Images of Christ

“By creating an image of Jesus (e.g., in a painting or a stained-glass window), a person is inserting his or her own ideas of what Jesus looked like. Because we do not know what he looked like, this image would not be a true image or representation of Christ. Rather, it would simply be an image of a man from the imagination of the artist that he or she has called ‘Jesus.’

“If these images, then, do not truly represent Christ, then they are put in the place of the true Christ. Evoking any sense of worship of that which is not Christ, but rather inserted in the place of Christ, is – by definition – idolatry. If an observer were to gaze upon that image with the intent to worship, by thoughts or emotions, then that observer would be worshipping a man-made image and not the true God-man, Jesus Christ. The same principle would also apply for images of God the Father and God the Holy Spirit.” 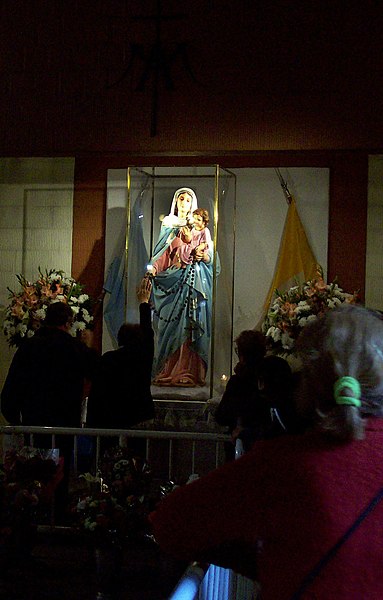 Mrs. Cathy White, who wrote the tract from which this excerpt was taken, was a Catholic for the first thirty-eight years of her life.

From the tract by Cathy White

“In closing I want to say that whatever your calling is in the Body of Christ I pray that you would take what is written in this tract to heart, and speak out at a time when it is not popular to do so. Those who have done so have reaped a harvest of souls for the Kingdom of God.

“I encourage you to do this especially if you are a pastor, evangelist, or in any position of leadership and have the God given opportunity to reach many. Speak not only to the Catholic people who are lost and need to hear the true gospel, but speak also on their behalf, speak for them who cannot speak for themselves. Tell your congregation that Roman Catholics need to be evangelized, and then teach your congregation how to evangelize the Roman Catholics.”

Son of man, I have made thee a watchman unto the house of Israel: therefore hear the word at my mouth, and give them warning from me. When I say unto the wicked, Thou shalt surely die; and thou givest him not warning, nor speakest to warn the wicked from his wicked way, to save his life; the same wicked man shall die in his iniquity; but his blood will I require at thine hand.

HT: Beth, “The Jesus of the Roman Catholic Church is not the Jesus proclaimed in God’s Word but rather, as Paul said, another Jesus.”

Faith and Imagination ~ Maria Ott Tatham - my other blog